Kontakt (simultan) is a hybrid net-art piece and screen installation on an experimental waiting process taking place as a permanent arrangement inside the studio of Reagenz. Here, a glass plate with collected lichen fragments is irrigated and photographed four times a day, perhaps producing an extremely slow growth, that is revealed as a time series of the photographs.

The recordings began in April 2021. The process can be followed online, as a bot posts the photographs on a social media account. The second form are physical installations, using either a suspended screen in a showroom window, in front of which stereoscopic lenses are mounted, or a tabletop viewing device. In these versions, the most recent photo is superimposed with a photo that was taken a month ago. The tabletop version allows the visitor to scroll through the time series.

The photographs are augmented by text lines contributed by people reacting to an ongoing open call, reflecting on waiting and on making contact. 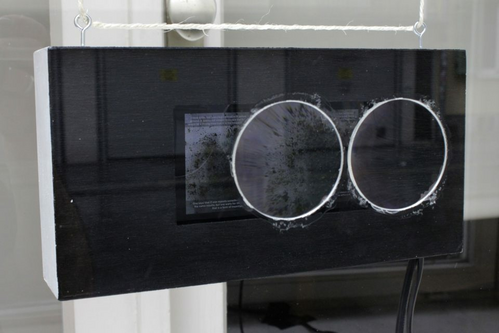