Check in. Getting Infos, etc
Thank you to all our local hosts supporting us with providing accommodations for our guests. 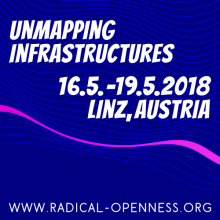 Welcome everyone! Now the festival starts.

From the Sputnik to the Stack: Radical Cartography in the Age of Planetary-Scale Computation
Pablo DeSoto

From the Soviet Sputnik to Bratton's proposition of the Stack, networked infrastructures have become a global architecture of computer mediation which produces a distributed and largely uncontested new expression of power (Zubofff 2016).
If radical cartography is the practice of mapmaking that subverts conventional notions in order to actively promote social change, the lecture explores an update of the term in the current Age of planetary-scale computational infrastructures, algorithmic governance and Surveillance Capitalism.
By contesting the Silicon Valley consensus about the future, counter-hegemonic mapping initiatives work both in visualizing the new world order complexity but also as ways of imagining and organising emerging citizen-based networked infrastructures.

The cloud of technology is blinding us. Efficiency and innovation are the buzzwords of the technology industry. To minimize negative consequences of these technologies on society, critics are asking to regulate the physical infrastructure, for access to the algorithms and adequate privacy legislation to limit data misuse. This talk will not look at technology but at power.